HOW MUCH DID WE TIP? The Evolution of Medical Cannabis

Medical cannabis is no longer on the cusp of a global tipping point, it has tipped. The question now is, how much?

Thirty-two countries have recognized the benefits of medical cannabis and have legalized it in one form or another. However, in the majority of countries where it is legal, obtaining access to a reputable supply remains difficult, either due to lack of supply or due to stringent regulatory restrictions. Two countries, Canada and Uruguay, have legalized the adult use of cannabis while others, including New Zealand, Mexico and Luxembourg, mull over following suit.

Some of the countries who have legalized medical cannabis, including Zimbabwe, South Korea and Thailand, are unexpected due to their history of harsh anti-drug policies. Thailand has not only legalized cannabis for medical and research purposes, but the government has built an industrial-scale medical cannabis facility, the largest in Southeast Asia. The 12,000 plants housed in this facility will be used in the production of over one million bottles of cannabis oil by February 2020. The economic potential of this plant is recognized by Thai Secretary-General Sontirat Sontijirawonghas who has called cannabis “Thailand’s future cash crop.”

The global spread of medical cannabis legislation extends to countries on every continent, with the exception of Antarctica for obvious climate-related reasons. 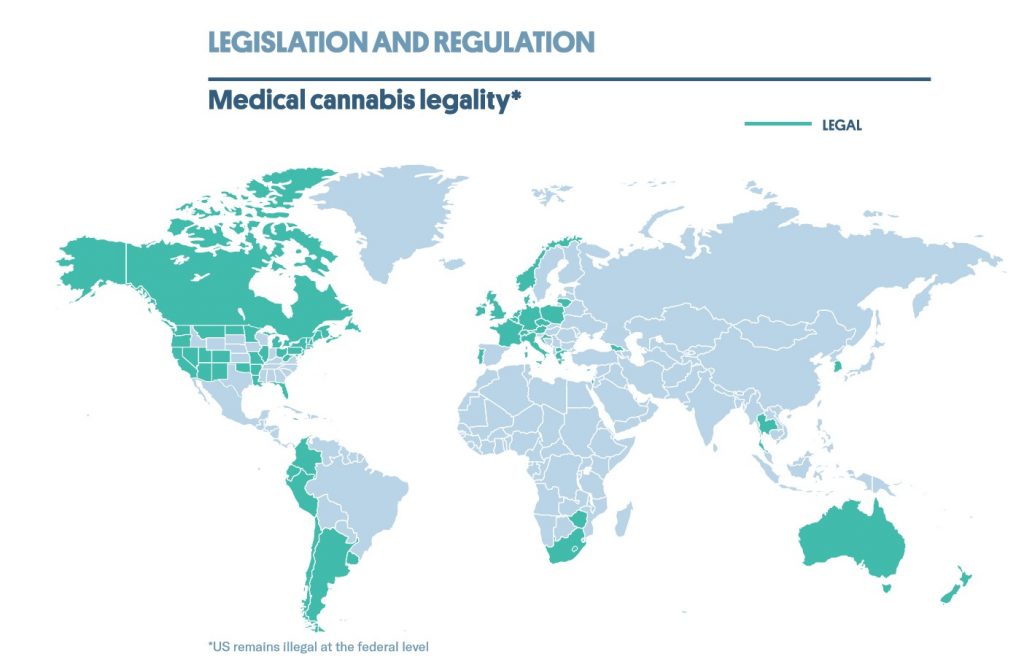 The regulatory progress we’re experiencing globally is unfortunately hindered by a lack of supply, creating an awful conundrum for patients who respond positively to medical cannabis but can no longer access it. This conundrum is devastating and discouraging: Patients finally find a solution to a chronic problem, only to be denied access to the medicine they need the next time they try to refill. The lack of a consistent medical-grade supply is of significant concern. The solution to this problem is in sight and there is hope that as LATAM countries ramp up, given their favourable growing conditions, an agricultural powerhouse like Peru can become to cannabis what Brazil is to coffee.

With an increasing number of examples of successful medical cannabis legislation, there is an opportunity for countries to turn to those nations who have executed legislation as an example. By engaging with countries who have been successful in executing medical cannabis legalization and regulations, emerging countries can benefit from their experiences and learn from their mistakes, while also gaining insight into what works best.

New Zealand, which passed the law legalizing medical cannabis in November 2018, is expected to release its regulations in December 2019, is an example of a country that leveraged the lessons from others when drafting their laws and regulations. In preparation for allowing more extensive medical uses, they are launching an inaugural medical conference, MedCann2020, in March of 2020 to educate and enable the New Zealand medicinal cannabis sector. This conference will bring together industry experts, scientists, clinicians, entrepreneurs, investors, policymakers and thought leaders from around the globe to share their first-hand insights and the latest information about the world of medicinal cannabis. As a medical advisor to Plena Global, I’ve been asked to keynote this conference.

Education remains the answer to many global issues, particularly to those that have suffered from an inappropriate stigma, as cannabis has. I have been astounded by the depth of research and subsequent education surrounding the ever-changing landscape of medical cannabis and the ECS (endocannabinoid system). The 27th annual ICRS was held in Washington DC in July 2019 and provided a platform for large amounts of cannabis research. At this conference, new research is presented from universities and research institutions around the world every 15 minutes for eight hours a day for four days. Conferences such as this one and MedCann2020 are promoting the proliferation of scientific data and working to remove the stigma that has prevented us from understanding the medical benefits of cannabis for so long.

Our progress is further shown by the approval of cannabis in mainstream Pharmaceutical products. Recently, there was the surprising approval of Epidiolex by the American FDA which has furthered the tipping of medical cannabis in that country. Epidiolex, which is plant-derived CBD, has been a game-changer. The same is true for Sativex (CBD and THC), a plant-derived medicine that has been approved in several countries. Though expensive, it should be noted that when picking this medication up from the pharmacy, there’s no need to tip.

In the next few years, many more countries are expected to legalize medical cannabis, a few will legalize adult use as well. The United States will lead the way; with each election, more states vote to legalize medical and/or adult-use cannabis. Currently, 34 states have legalized medical cannabis while 11 have legalized adult use. Soon, we will look back on the prohibition of cannabis as not only a foolhardy decision but one that was cruel and damaging. It is an incredibly exciting time to witness a global tipping point of this magnitude, with the potential to be of help to so many around the world. When the day finally comes where a child anywhere in the world is able to easily access this plant and its benefits, then we will have arrived.

Dr. David Hepburn is a co-founder of Plena Global, currently serving as the Medical Advisor.

Dr. Hepburn is an award-winning syndicated columnist featured in several major newspapers across the United States and Canada and is a recipient of the prestigious Canadian Community Newspaper Association’s Columnist of the Year Award. As a doctor in the military, he served onboard a ship as a surgeon in the Persian Gulf War. In 1995, he lived in the jungles of Vanuatu where, for eight months, he was the sole doctor and bush surgeon to 30,000 people. His book, “The Doctor is In(sane)” was released in the spring of 2009. He was the co-host of the TV show, “Buyologic” on the Oprah Winfrey Network, and his interest in sports and sports medicine resulted in him being called to be a medical director of the 1994 Commonwealth Games, and a team physician for Canada in the 1996 Olympic Games in Atlanta. Dave has also been, or currently is, the team doctor to national rugby teams as well as junior and professional hockey teams. Amongst the growing number of medical physicians educated about cannabinoid medicine, he is an active member of: Society of Cannabis Clinicians, International Association for Cannabinoid Medicines (IACM), the Canadian Consortium for the Investigation of Cannabinoids (CCIC) and Physicians for Medical Cannabis (PMC).

Learn more about the medical-grade cannabis products we produce